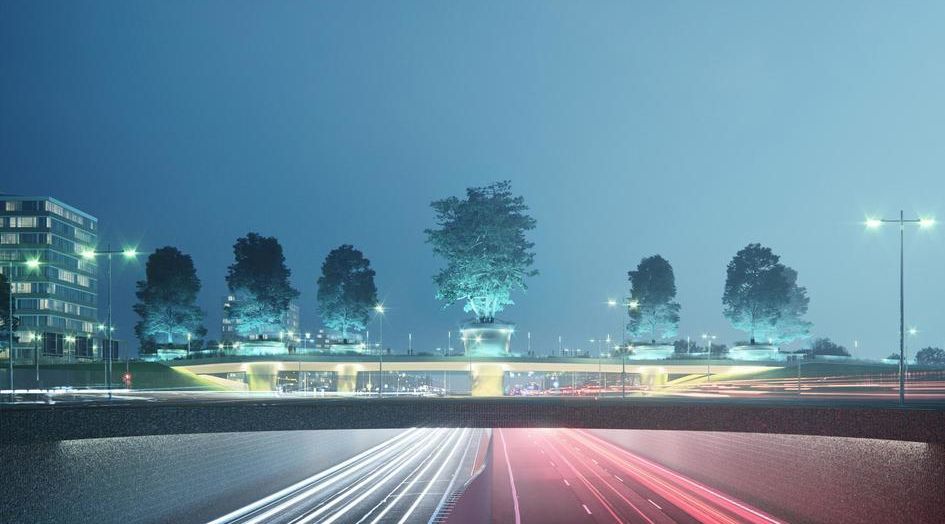 Amstelveners choose the “Bomenbrug” (Bridge of Trees) for the A9

PRESS RELEASE 6 December 2017 – Amstelveners united in agreement. Residents in Amstelveen were presented with designs by four teams for the construction of a new 200-metre-long bicycle bridge spanning the A9. A landscaped crossing with giant flowerpots was the clear favourite, attracting 77% of the approximately 12.000 votes. The winning design was by Paul de Ruiter Architects, CULD (Complex Urban Landscape Design) and structural engineering firm Tielemans Bouwconstructies.

Over the next few years the A9 motorway will be widened, lowered and covered to form a 300 metres long tunnel. The new bicycle bridge was commissioned to provide pedestrian and bicycle access from the southern part of the city of Amstelveen to its centre. The winning design presents the bridge as the green passageway to the city centre, a landscaped embodiment of Amstelveen’s international renown as a city of botanical gardens. A9 committee member Herbert Raat (VVD): “Amstelveen’s choice was clear and unequivocal. We were simply blown away by the level of participation in this ballot; it’s a clear indication of people’s desire to have a say in their city’s development. The winning design feels like a natural extension of the city’s green character. As far as I’m concerned, the next step is for Amstelveners to name the bridge. ‘’

Paul de Ruiter Architects, Complex Urban Landscape Design and Tielemans Bouwconstructies will now work up the design of the leafy connection that is set to reinforce the city’s green topography. Cyclists and pedestrians can expect to avail themselves of their green crossing upon its completion in 2024.

An iconic addition to the A9

The view from the A9 is of an instantly recognizable landmark. The bridge’s columns are shaped like giant flowerpots that protrude above deck bearing large indigenous trees, and around which the deck winds its way like a green ribbon. This “bridge of trees” represents a unique addition to the rural road network.

With its meandering paths and lush sections of green, the bridge resembles nothing so much as a leafy park. As night falls, subtle lighting will pick out the trees and greenery, presenting Amstelveen’s new icon as a safe and peaceful oasis in the surrounding dark, a garden of calm above the high-speed road network below.

Paul de Ruiter Architects are innovators in the field of sustainable architecture, and their portfolio of energy-neutral buildings in possession of sustainability certificates is unrivalled anywhere in the Netherlands. Its buildings are designed to generate energy not only in the literal technical sense, but also in a human sense. The virtues of qualities like health and the elements of well-being that stimulate productivity are considered alongside quantifiable factors such as daylight optimization, and together form the basis of their approach to designing intelligent sustainable buildings and structures. The firm’s portfolio includes infrastructure projects as well as residential buildings, hotels, office buildings, schools, public buildings, laboratories and theatres. Recent projects include B'Mine in Amsterdam, QO Hotel in Amsterdam, Biosintrum (Biocentre) in Oosterwolde, the aesthetic master plan for the Afsluitdijk, and Unilever’s Global Foods Innovation Centre in Wageningen.

Huub Juurlink, Jaakko van 't Spijker and Cor Geluk founded CULD as a joint venture in 2006 to facilitate an interdisciplinary approach (urban design, landscape architecture and, architecture) to the complex design challenges of our time. CULD's designs are characterized by their distinct ambience, one that envelopes operational activity, people flow, the inspiring spaces and the changing typology of the buildings themselves, all of which reinforce one another in a continuing loop. CULD are currently involved in several realisable local and international projects that invite and incorporate significant input from residents, users and other stakeholders. CULD’s award-winning designs include one for the Kaohsiung Waterfront International master plan competition, and another for the master plan of Erasmus University, Rotterdam. CULD is also working on a series of interdisciplinary projects, among which is the new residential waterfront development in Rotterdam’s Coolhaven — "Little C" — for which the agency’s responsibilities include urban design, landscape architecture and the design of the buildings themselves.

Founded in Eindhoven in 1958, Tielemans Bouwconstructies are one of the largest and most highly regarded structural engineering firms in the region. Its engineers work on innovative and landmark projects with renowned architects across the world. The firm has years of architectural and public project experience, each commission of which has demanded a tailored approach to its realisation.

The firm’s involvement starts from the moment of tender, and it considers every significant parameter of every project alongside its design and construction partners. Such parameters include sustainability, flexibility, functionality, cost-effectiveness, feasibility and implementation itself. The firm plays not only a supervisory role, but also a steering one, which allows it to streamline the execution process all the way to its very end. The firm’s primary objective remains the same with each project: to work in partnership with the design team for the optimal result.

Check out the Project page

Read more about the infrastructural development ''A9 Amstelveen'' on this webpage. (Dutch text)