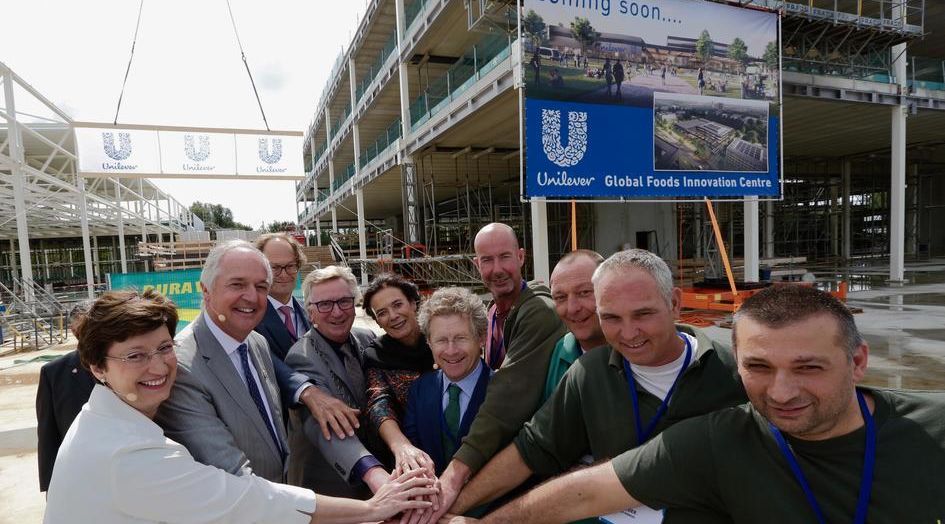 Today, construction on Unilever's new Global Foods Innovation Centre for healthy and sustainable food reached its highest point. The state-of-the-art building, designed by Paul de Ruiter Architects, is situated at the heart Wageningen campus. Its operation and location is designed to facilitate optimal interaction and knowledge exchange between Unilever and Wageningen University & Research (WUR), as well as with startups and other companies on the campus.

Earlier this week, the Dutch Green Building Council officially recognised the sustainable merits of the design stage by according it the highest level of certification for environmental performance, a BREEAM-NL Outstanding certificate. The score represented by this certification was one of the highest ever recorded by any research facility anywhere in the world. The design achieved this score by its clever integration of a variety of innovative techniques that are set to contribute to the well-being of both the planet and the facility’s occupants. Both milestones were celebrated this afternoon by a large group of stakeholders that included Paul Polman, CEO of Unilever, the Dura Vermeer team and other parties involved in making the project a reality.

Commenting on the significance of the centre, Paul Polman said: “As a constituent of Wageningen’s agri-food ecosystem, the Global Foods Innovation Centre is specifically designed to increase the impact of our R&D expertise by facilitating close collaboration with a wide variety of partners from a spectrum that includes large multinationals, SMEs, startups and NGOs. These collaborations are already in full swing at a national level, in anticipation of this facility, for only by such joint efforts will we succeed in realising the large-scale changes necessary for the transformation of the global food system.”

Wageningen mayor Geert van Rumund said: “We’re really looking forward to Unilever’s arrival on campus. This sustainable facility, whose topping out we celebrate today, corresponds neatly with the city’s ambition to become the country’s knowledge centre for agri-food and life sciences from its place within the Food Valley. Our knowledge and innovation networks, which are already highly effective, are set to receive a tremendous boost on account of this centre, the result of which will contribute to our achievement of a leading position in the international arena.”

A team of 200 have been working on the facility since construction began. The Dura Vermeer Hengelo team will install the building’s facade in September, before moving on to its interior walls in October. Construction is slated for completion in the second quarter of 2019, and the centre is scheduled to open in mid-2019.