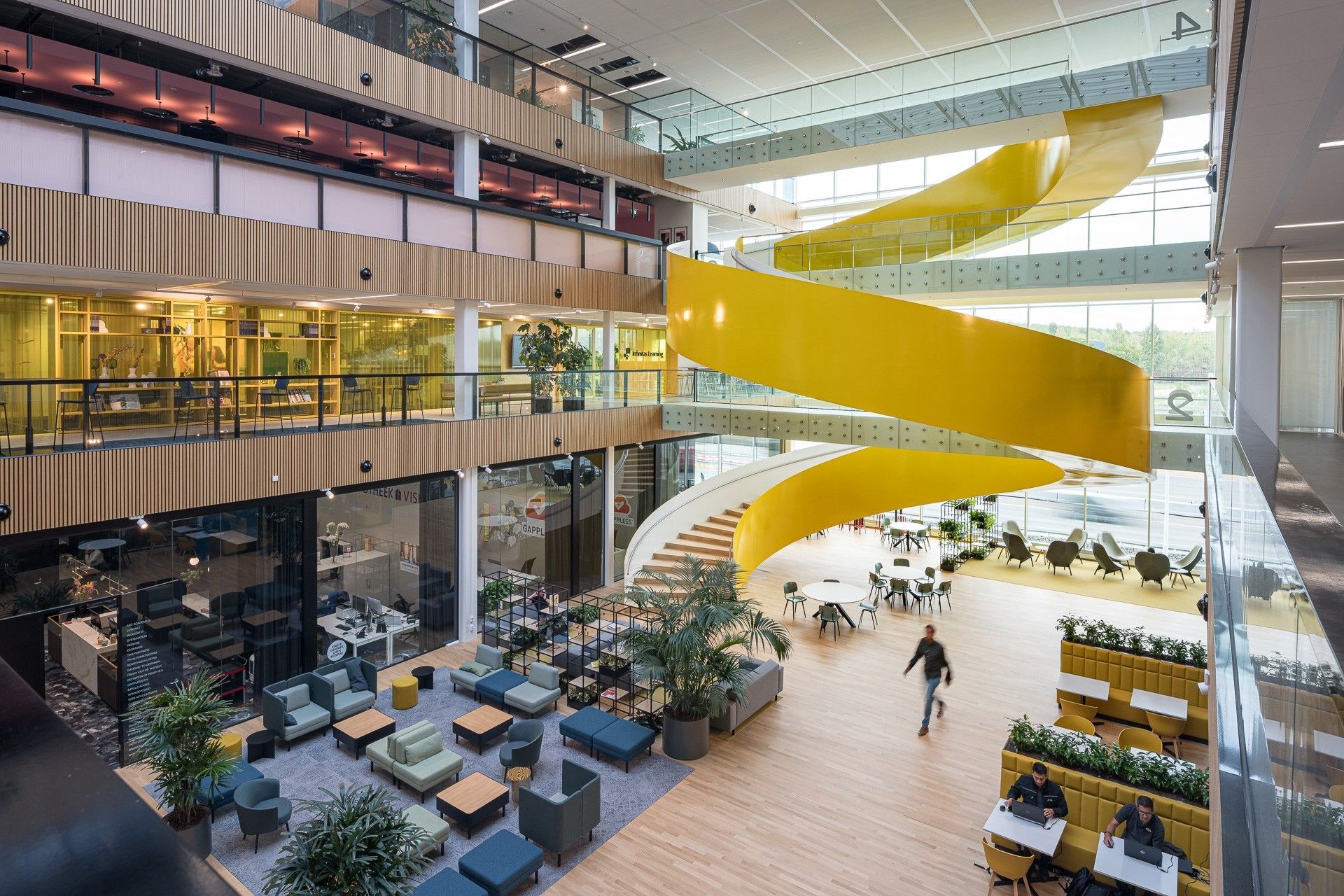 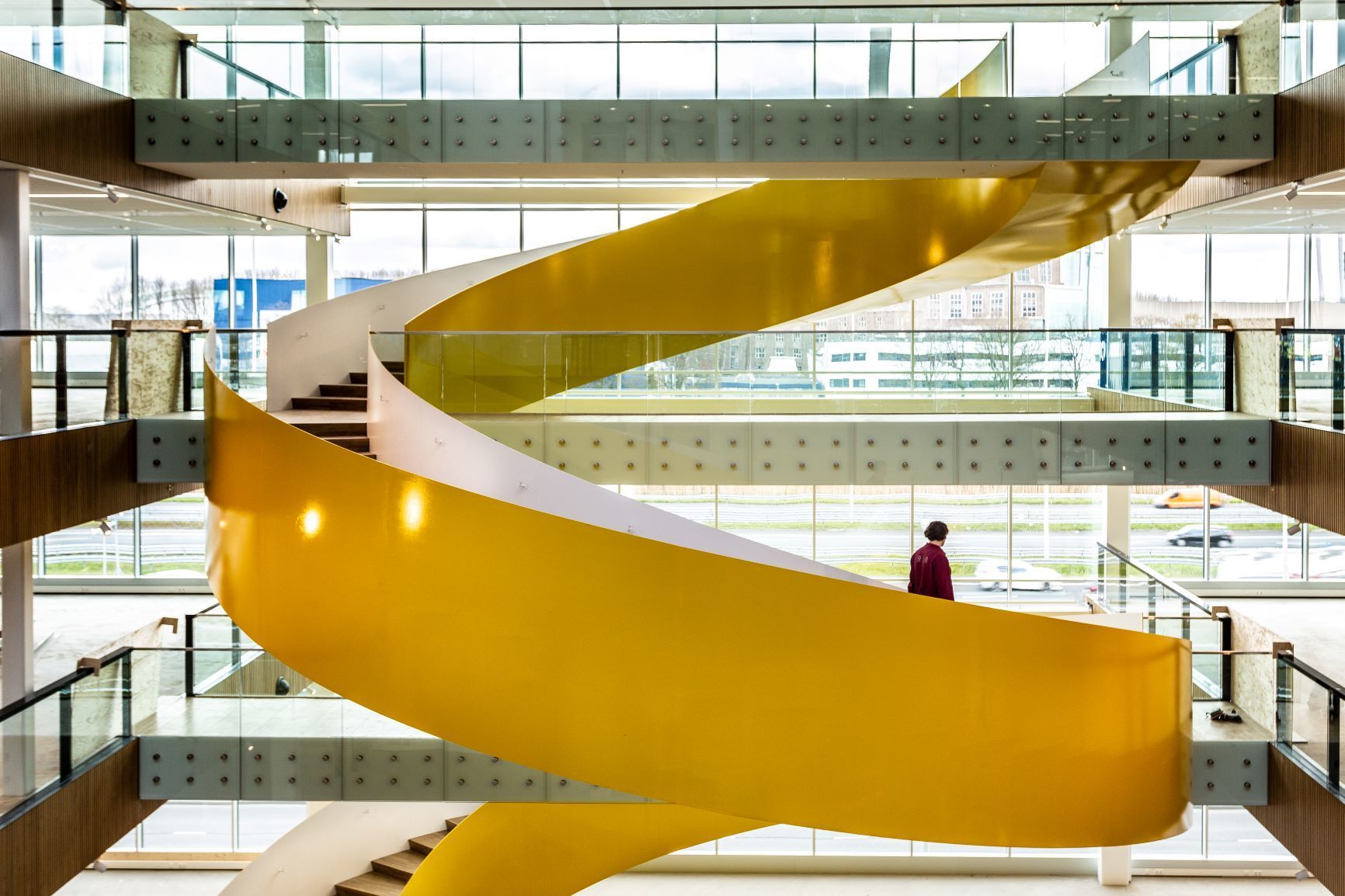 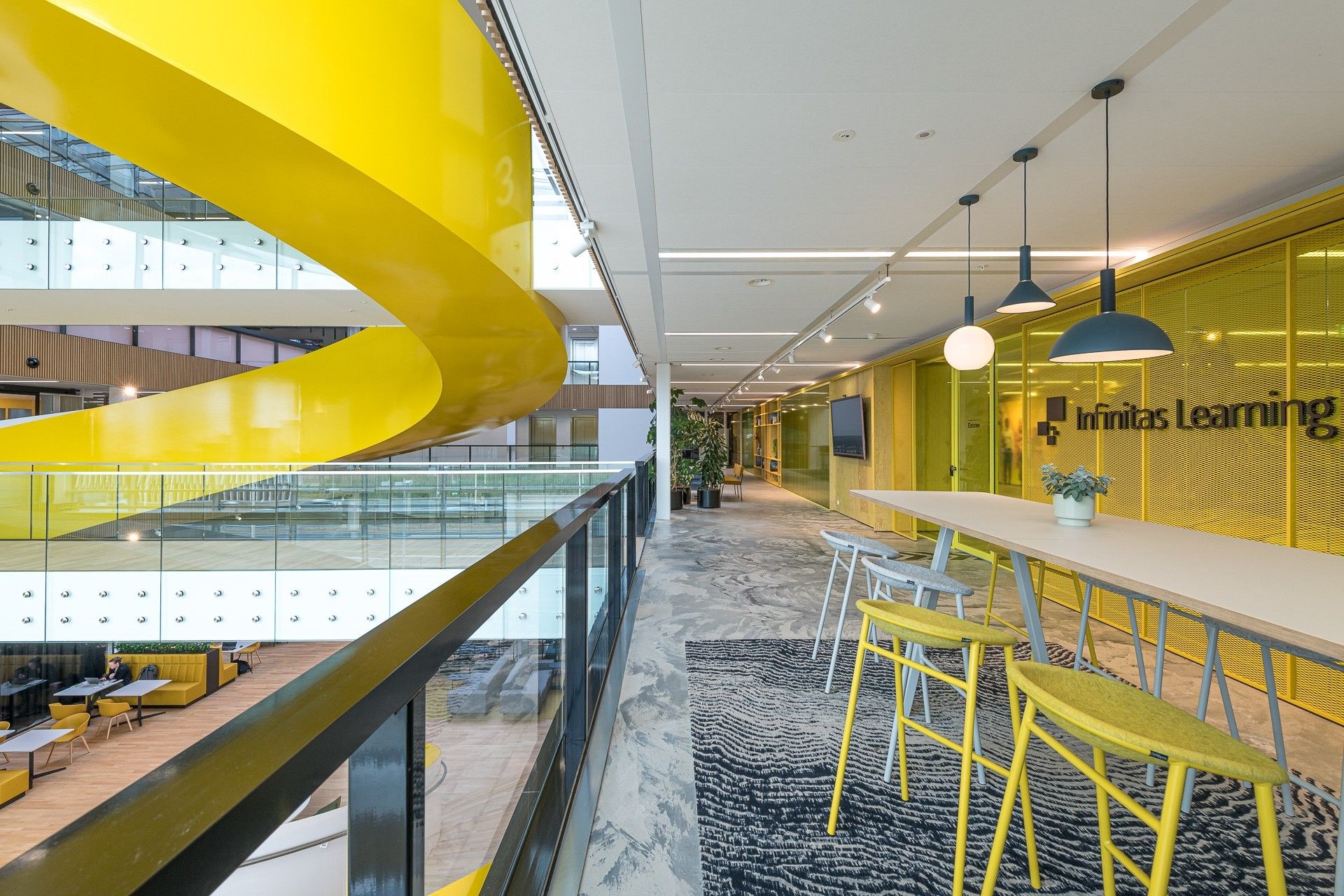 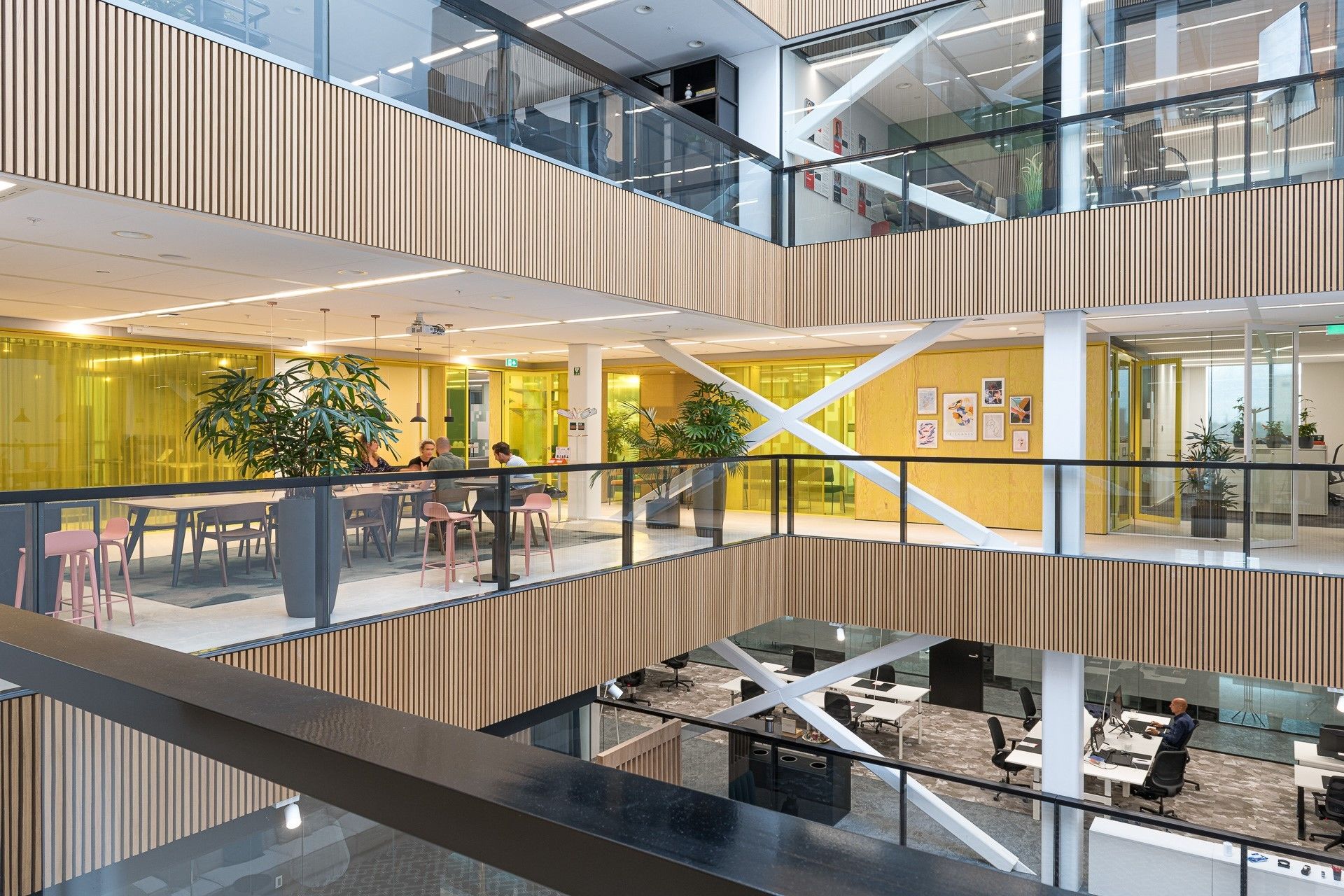 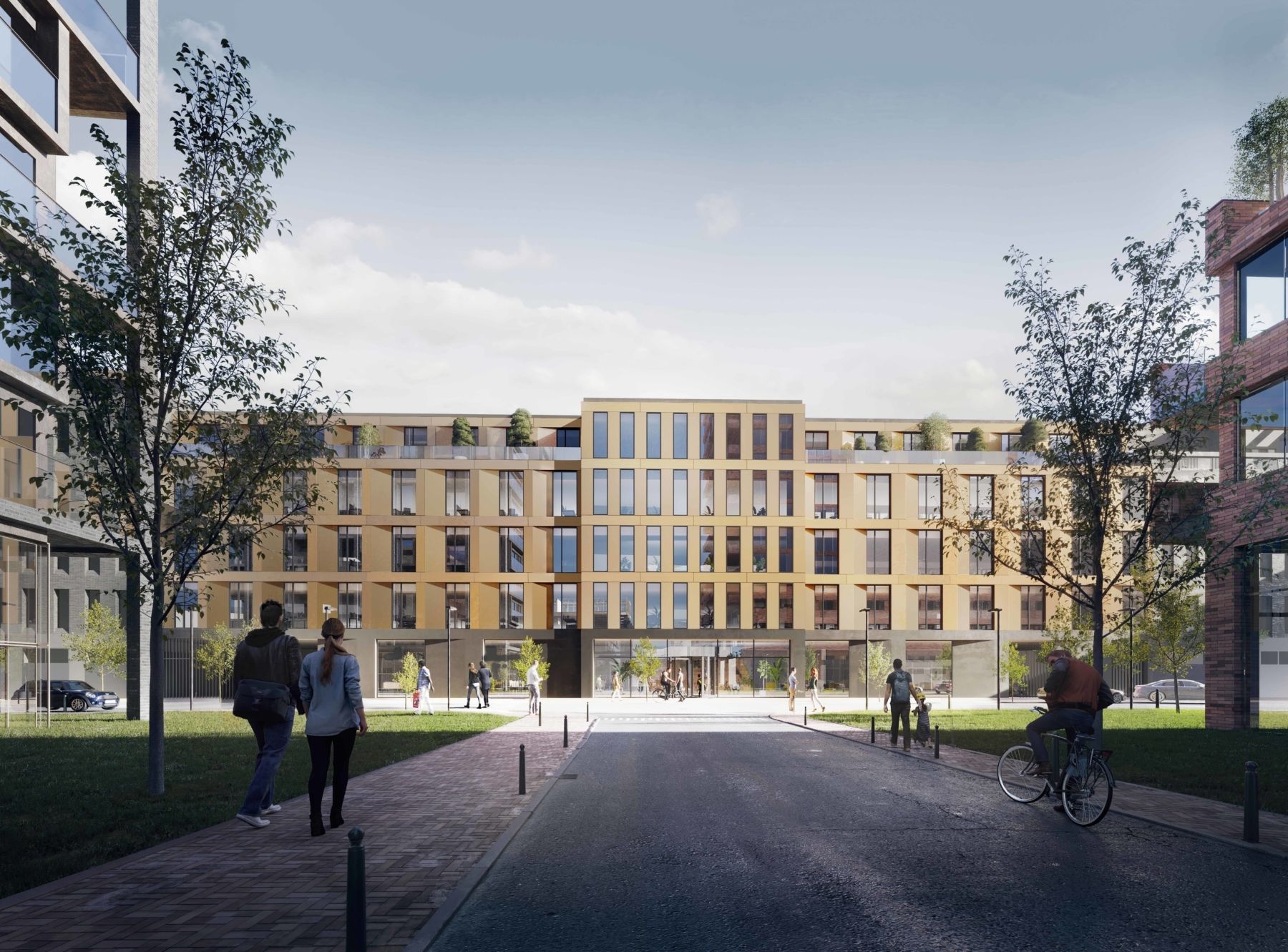 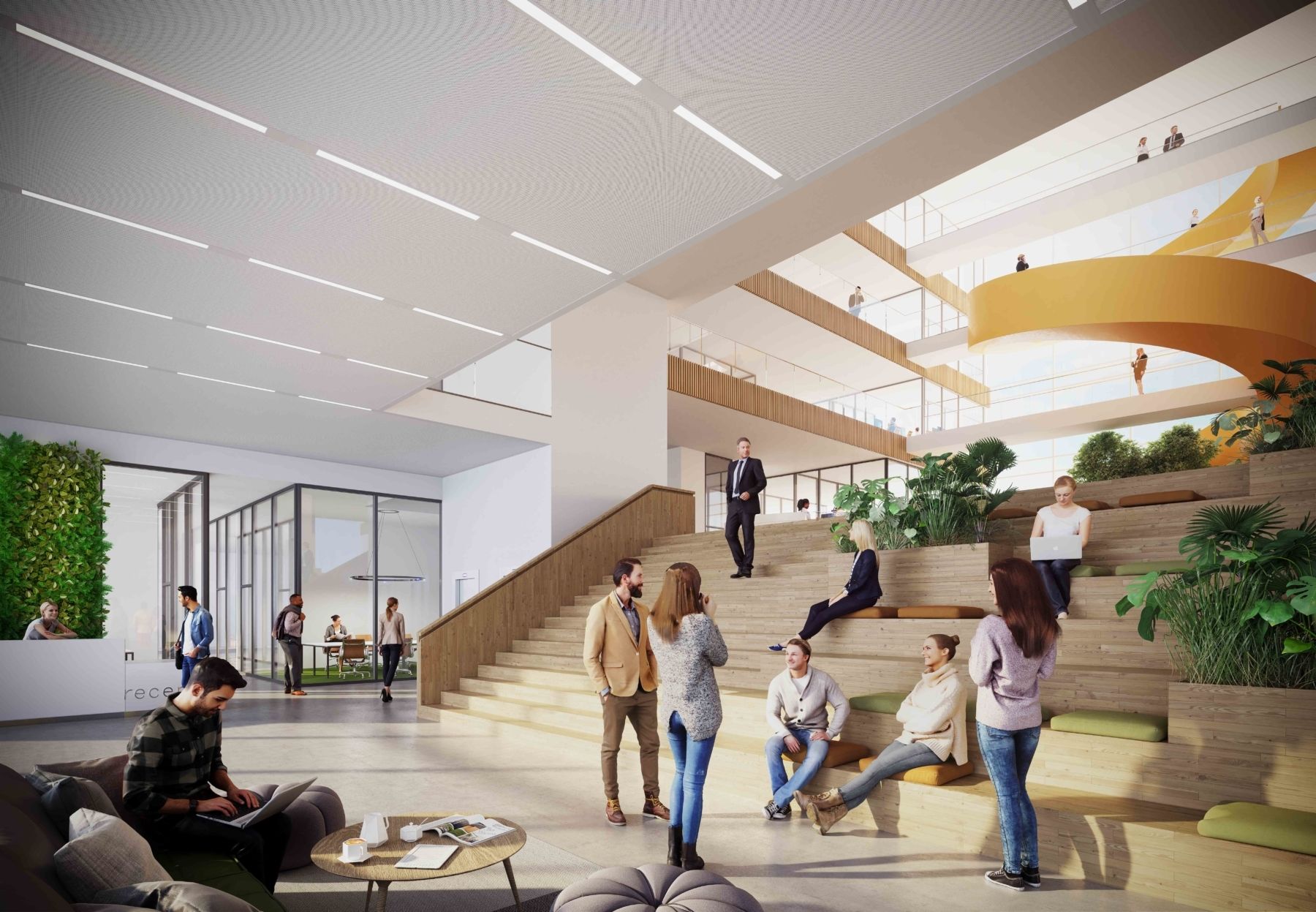 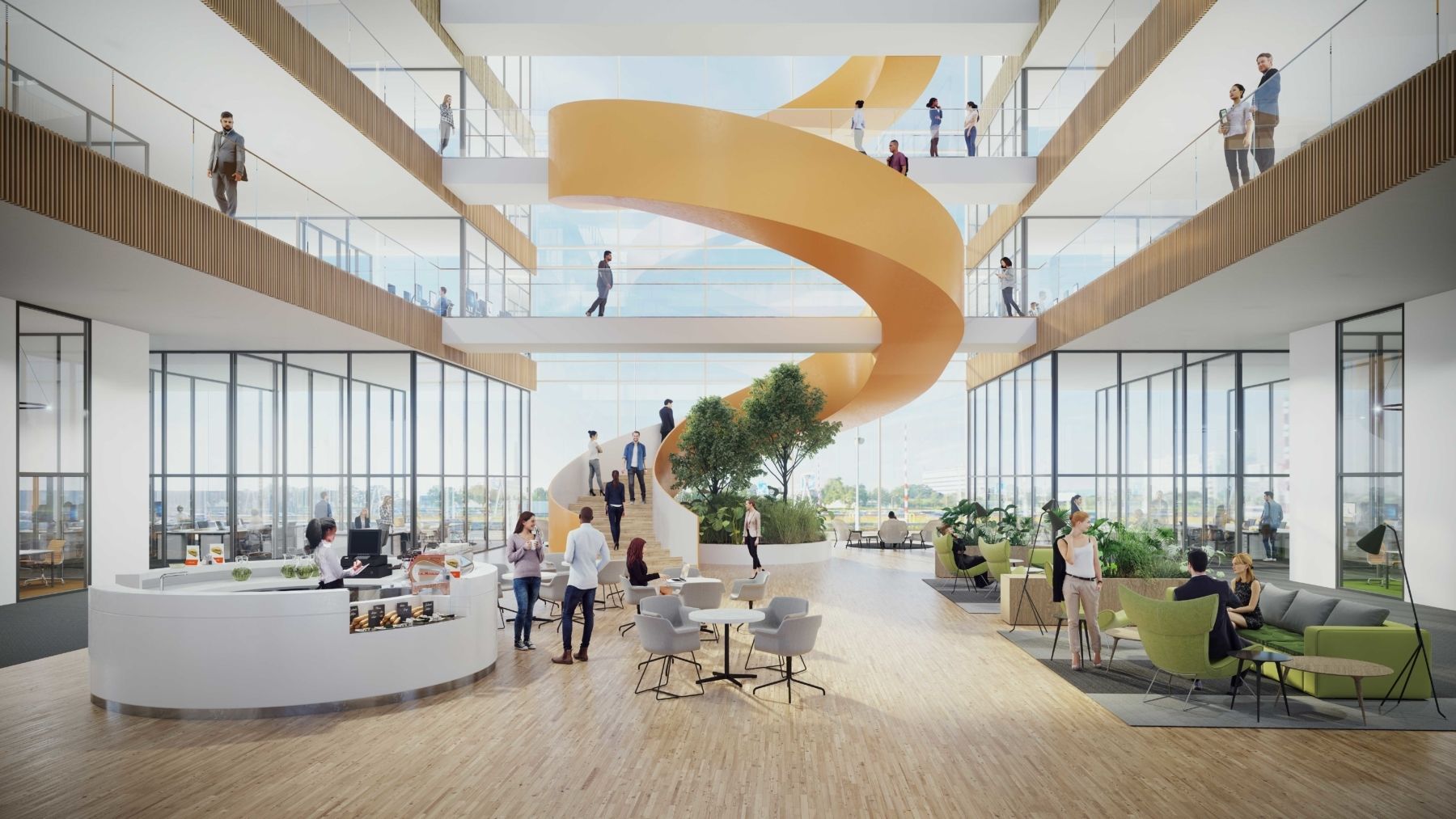 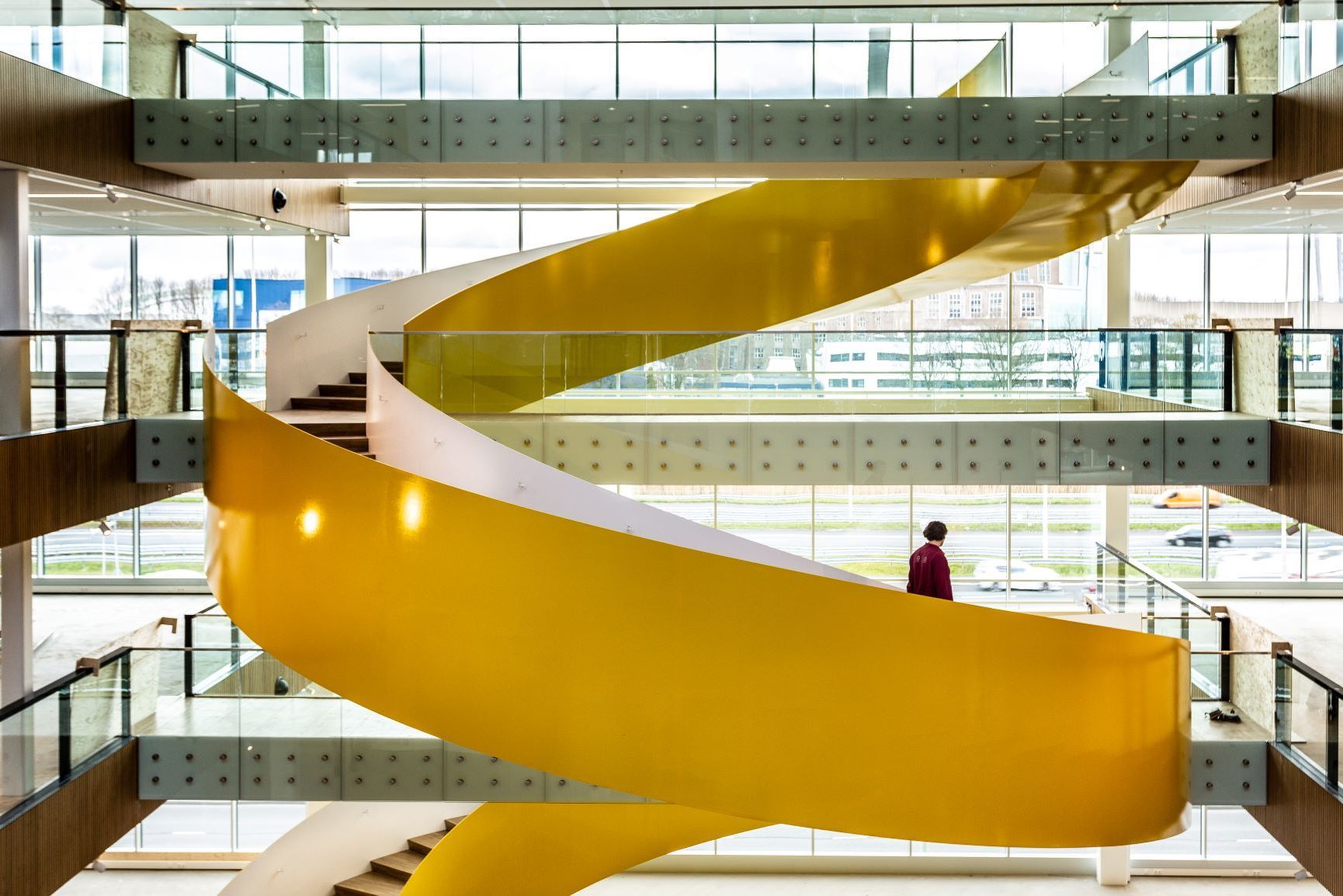 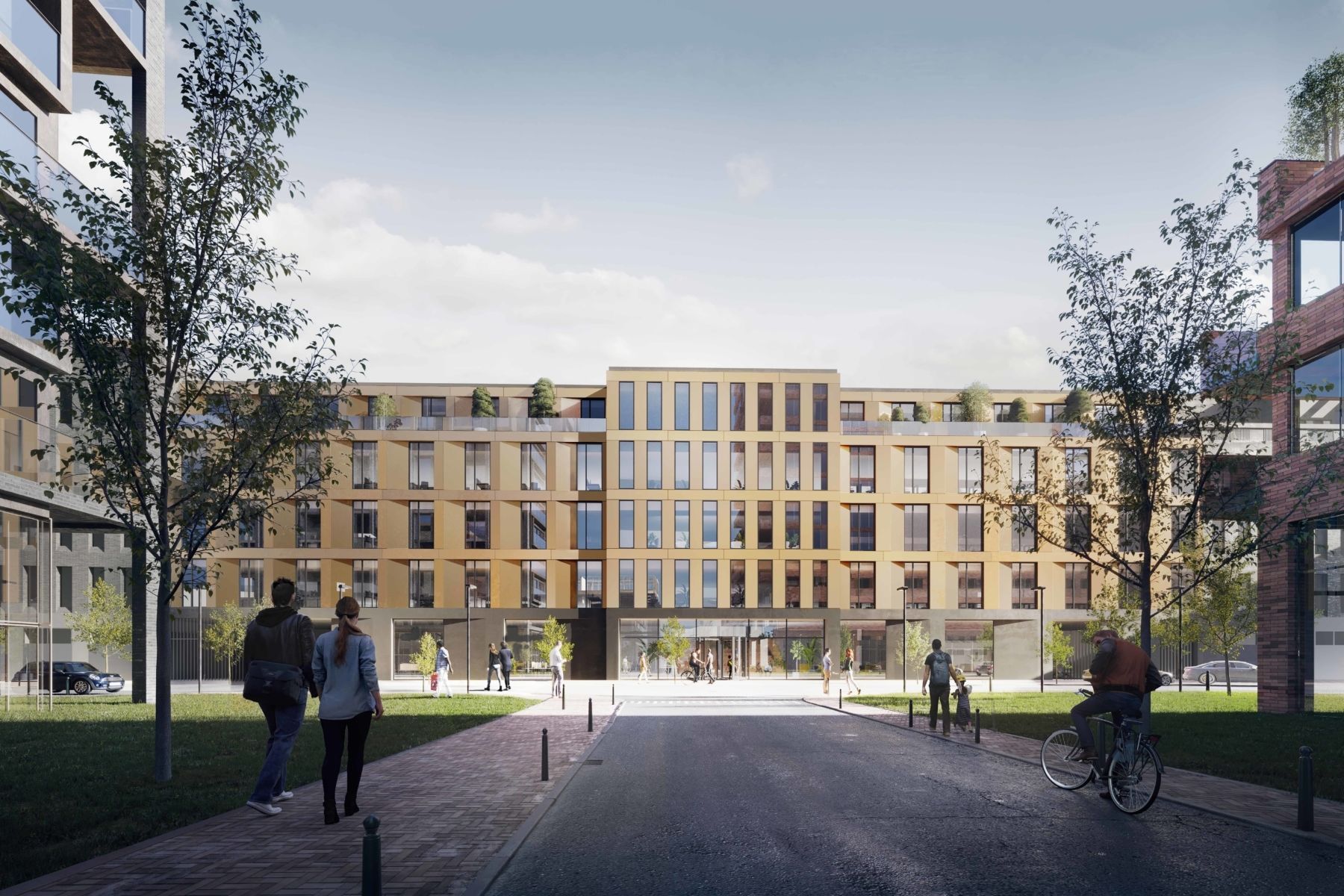 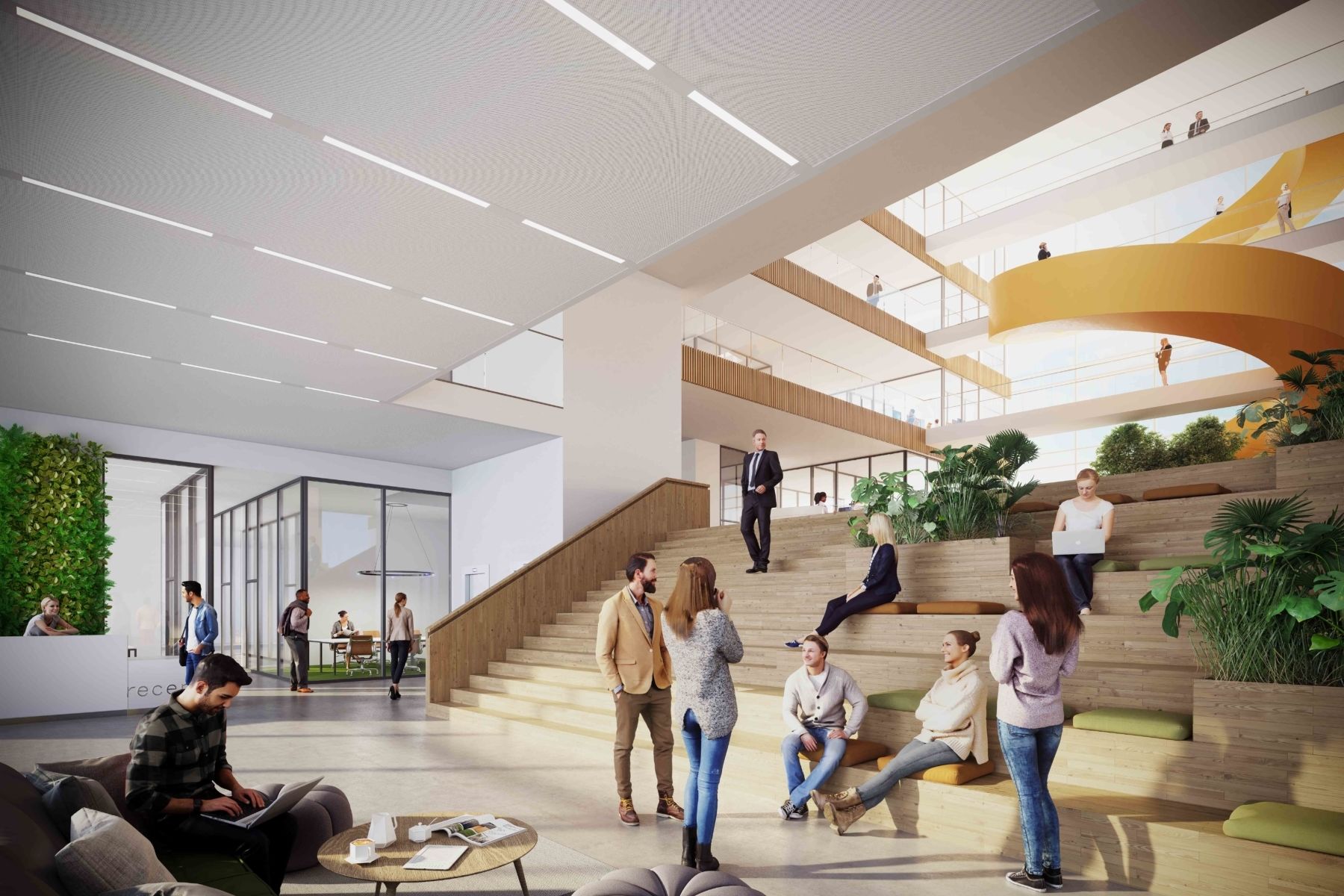 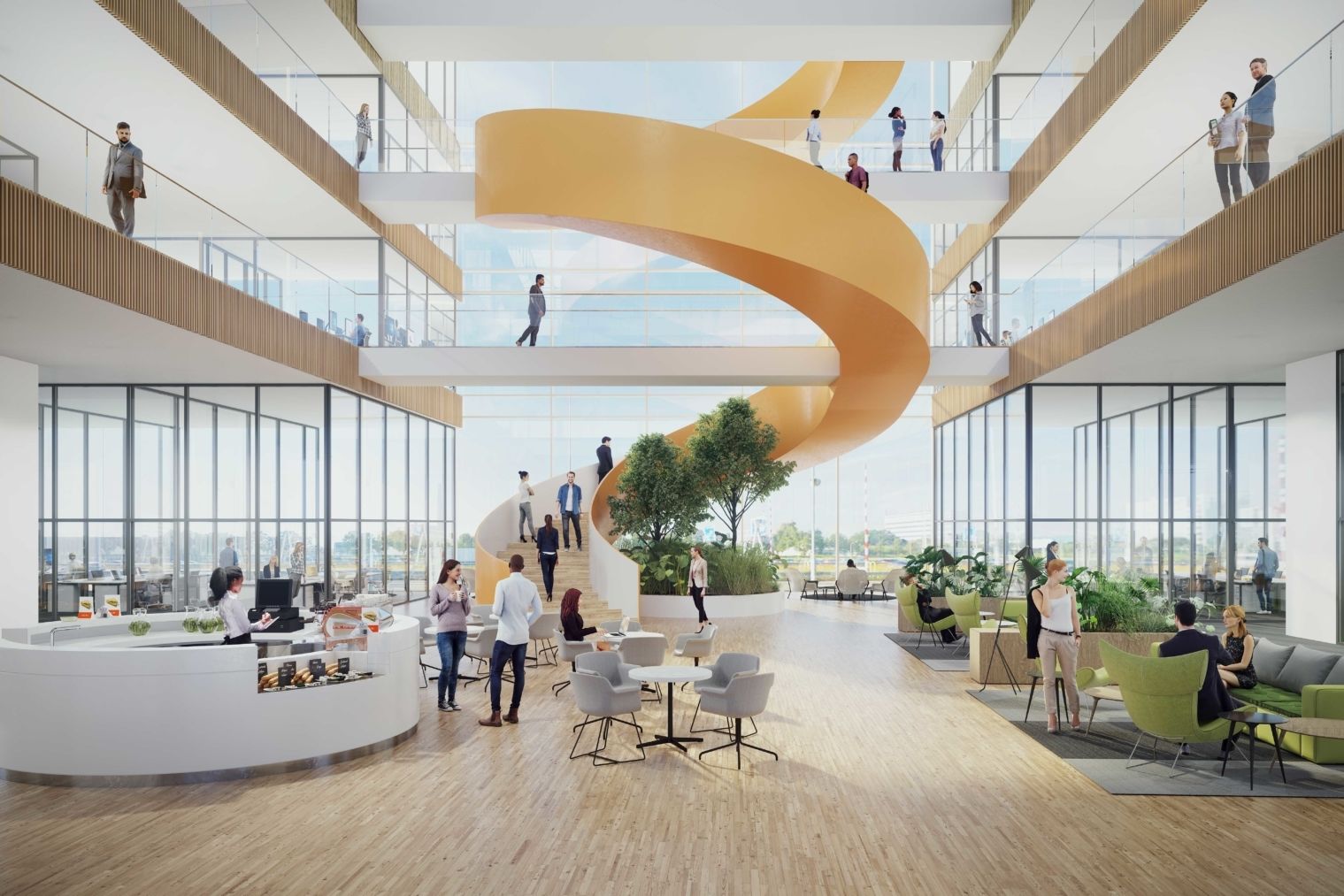 Helix is a new multi-tenant building in the Leidsche Rijn neighbourhood of Utrecht that we designed for the property developer AM. The building was conceived to meet businesses’ growing need for work premises that support the health and well-being of their staff, are easily accessible by public transport, are designed to be future-proof and command attention. Helix meets these needs in a striking design featuring a showstopping spiral staircase.

Considerations for the health and well-being of residential and commercial tenants are woven into AM’s core values, and Helix is practically a blueprint for addressing these considerations comprehensively and effectively. Consequently, the building is on course to achieve a GPR score of 8 and has been registered for WELL Building Standard certification, an accreditation from the world’s first sustainability-based system focusing exclusively on measuring, monitoring and certifying the impact of a building’s features on human health and well-being.


The building offers over 10,000 m2 of rentable floor space, four floors of offices and two decks of indoor parking with room for about 150 cars. The addition of a multi-tenant building of such allure just north of the city centre constitutes an important boost for the stature of this business district.

A healthy urban environment for workers

Helix is a sustainable office building that supports the health of its users. It encompasses a mix of invigorating spaces that promote well-being, create a pleasant work environment and facilitate interaction and socialising.

At the heart of the building, corkscrewing its way to the top of the atrium, is Helix’s pièce de résistance, a spiral staircase of singular beauty that is visible to drivers zipping by on the A2. The scale, form and visual appeal of this fixture are calculated to entice workers to take the stairs rather than the lift, thereby promoting physical activity. This unmissable architectural statement is also designed to foster a sense of community among workers from the building’s various tenants by providing them a symbol and talking point of their shared identity as occupants of the same building. Natural light illuminates Helix’s every corner, thanks to an end-to-end glazed façade, a patio and two large atria. The ground floor of the side overlooking the street features an open and airy double-height area for socialising that includes an inviting lobby, a restaurant and a set of meeting rooms.

“It encompasses a mix of invigorating spaces that promote well-being, create a pleasant work environment and facilitate interaction and socialising”

The design is rooted in multiple efficiencies, including that of resource-efficient construction and materials. The building is also designed to be highly adaptable, enabling its interior to be repurposed according to its tenants’ changing needs.

Helix is scheduled for delivery in the second quarter of 2021. 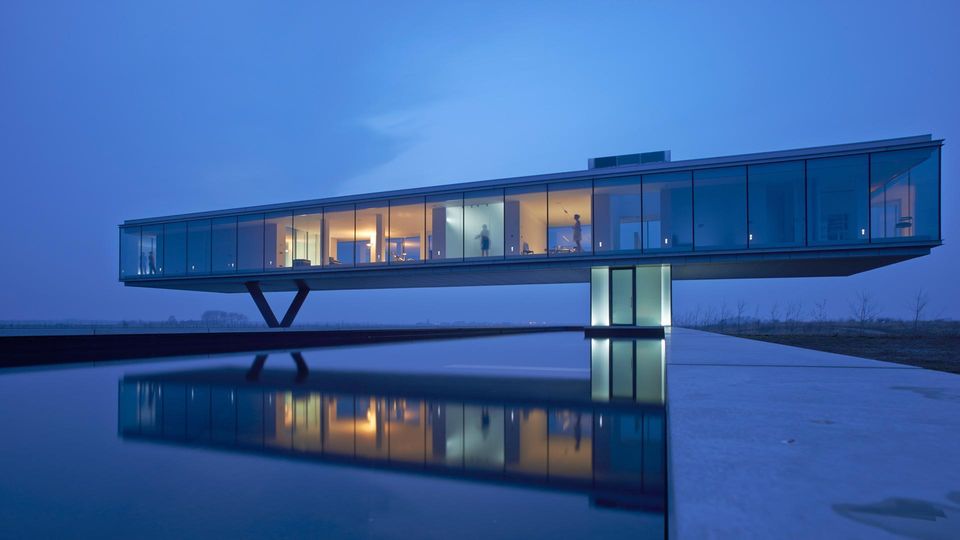 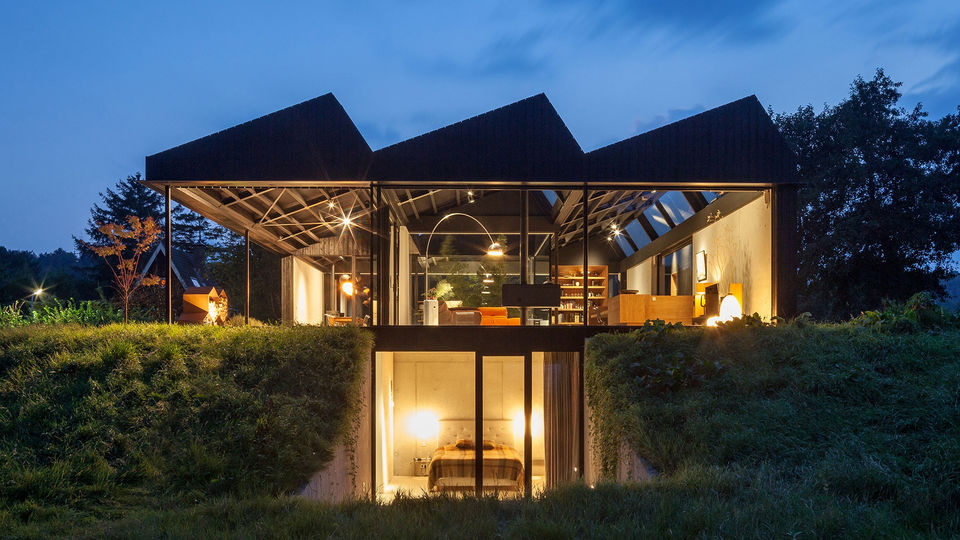